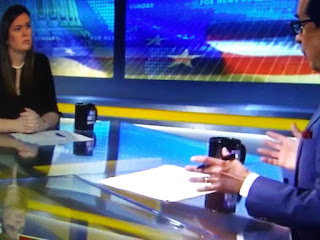 What assets does the State Department have on our southern border?
That's not their area.  So it's meaningless for Chris Wallace to them as a source of information to despute Homeland Security findings. Besides, the State Department probably has the largest percentage of Liberals who hate Trump working for them than any other federal agency.   I thought Wallace was a better journalist than that.

The commander-in-chief has said he needs $5.6 billion for the barrier because drugs, human traffickers and terrorists are crossing the Mexican border into the US.

At a White House news conference last Friday, Homeland Security Secretary Kirstjen Nielsen said Customs and Border Patrol stopped more than 3,000 “Special Interest Aliens” trying to get into the US via the border.

“But Special Interest Aliens are just people who come from countries that have ever produced a terrorist. They’re not terrorists themselves,” Wallace said to Sanders after showing a clip of Nielsen’s remarks.