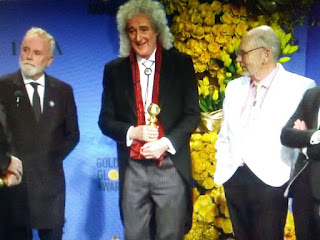 The mainstream media once again is lying to you in their coverage.
They're trying to portray Bohemian Rhapsody as an upset winner when in actuality it was in the bag all along.   When it comes to Hollywood dolling out awards, Gay subject matter wins most of the time.  A Star is Born never has a chance.


CNBC reports thunder bolt and lighting rocked the 76th Golden Globes where a string of upsets culminated with the Freddie Mercury biopic "Bohemian Rhapsody" winning best picture, drama, over another movie about musicians: Bradley Cooper's much more heavily favored "A Star Is Born."

"A Star Is Born" came into Sunday's ceremony at the Beverly Hilton Hotel in Beverly Hills, California, as the presumed heavyweight and Oscar favorite. But Cooper's remake went home with just one award, for the song "Shallow." Instead, the night's final two awards went to "Bohemian Rhapsody" — the popular but poorly reviewed drama about Queen's frontman, a movie that wrapped after jettisoning its director, Bryan Singer — and best actor-winner Rami Malek for his full-bodied, prosthetic teeth-aided performance as Mercury.