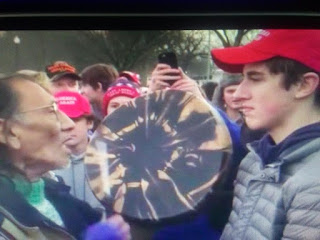 This story is yet another screaming example of our bias, corrupt media that doesn't practice journalism anymore.
They didn't seek the facts of what really happened.  They want to make up their own narrative to paint these white teens as racist Trump supporters.  That's all they cared about and it's blowing up, again, in their faces.


PJ Media reports thanks to the sloppy, one-sided reporting of the malicious, agenda-driven media, a group of Catholic high school teenagers and their families have become the subjects of threats and harassment from a hateful online outrage mob. Their only sins? Being white, Catholic, and supporters of the president.

The full story has emerged in the wake of the fake news blitzkrieg over the weekend, and the media outlets that spread defamatory smears against the kids are now being warned to correct and retract their stories or face a lawsuit. Contrary to the media's malicious narrative, the kids were not racist rednecks mobbing a Native American elder with hateful slurs. It was quite the opposite.