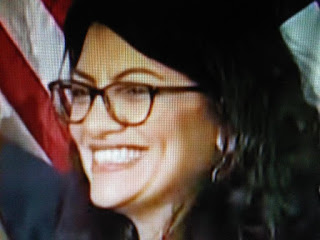 Tlaib is a disgrace!
Is this the best the Democrat Party has to offer, an anti-Semitic Palestrina dirt bag?

Fox News reports less than a week after issuing a profanity-infused call to impeach President Trump on her first day in office, Michigan Democratic Rep. Rashida Tlaib is under fire from Republican politicians and commentators for openly posting what they call an anti-Semitic slur on Twitter.


Top Republicans in the Senate are also alleging that Democratic leaders are hoping to hide the fact that Tlaib is just one of many new Democratic politicians in Congress who harbor deeply anti-Israel views.

Tlaib, responding to a post by Vermont Independent Sen. Bernie Sanders on Monday, suggested that Senate Republicans were more loyal to Israel than the U.S., amid a report that GOP leaders were planning to introduce a bill that would punish companies that participate in the so-called "Boycott, Divestment, and Sanctions" (BDS) global movement against Israel.