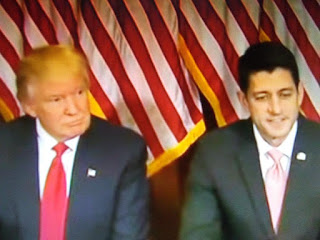 The reason we're at this point in history is because the GOP establishment purposely dragged their feet to get us here.
Paul Ryan stabbed President Trump in the back on numerous occasions.  He never lifted a finger to help thus president.  Ryan put the security of this nation at risk over petty difference with Trump.


Daily Caller reports President Donald Trump last week reportedly criticized Paul Ryan for not funding a border wall while he was in charge of the House of Representatives.

A Washington Post report, which delved into the process behind President Trump’s decision to sign a continuing resolution to fund the government through February 15 absent any border wall money, quoted a Wednesday meeting attendee who said Trump accused the former House speaker of having “screwed him.”

At a meeting Wednesday with conservative groups, the president accused former House speaker Paul D. Ryan (R-Wis.) of having “screwed him” by not securing border wall money when Republicans had the majority, according to one attendee, Mark Krikorian, executive director of the Center for Immigration Studies. He said Ryan should have gotten him money before he left but he had no juice and had “gone fishing,” according to two attendees.