What Today Show did nit ask about: Native American activist/fraudster Nathan Phillips has violent criminal record and escaped from jail as teenager 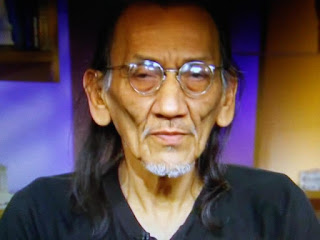 The below video shows NBC at their softball interview best.
The bias is obvious.  The media is portraying Nathan Phillips as a noble person.  The reality he's a liar!  He even lies about what happened in the video.  He walked into the crowd of teens.  They didn't surround him.  And he could've continue to keep walking, but he chose to stop where Nick Sandman was standing.

Special Note:  As far as Phillips military service.  I don't know or I haven't seen a quote from him claiming he was a Viet Nam Vet.  However, multiple media reports said he was.  It's the fault of the media for putting it out there and I believe it was done purposefully by the media to make Phillips a sympathetic figure.  Classic mainstream media bullshit!

Washington Examiner reports  Nathan Phillips, the Native American activist who falsely accused Covington Catholic High School students of blocking him during a confrontation he initiated, has a criminal record — including assault and escape from jail — and appears to have misrepresented his military service.
Phillips, 63, suggested high school junior Nick Sandmann, the teenager at the center of the viral encounter after separate D.C. rallies, face expulsion for failing to "accept any responsibility” or apologize to Phillips publicly.
In his own teenage years and early 20s, Phillips, using his adoptive name Nathaniel R. Stanard, was charged with escaping from prison, assault, and several alcohol-related crimes, according to local news