Oscars so Predictable: Best Actor goes to the one who played the Gay guy-Rami Malek 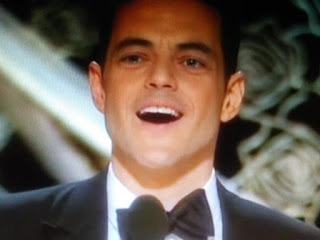 When the Oscars nominations were announced a few weeks ago, I told my wife whoever plays a Gay character wins.
It's like the Sun coming up in the morning.  And it happens again last night.

Bohemian Rhapsody‘s underdog success this awards season is one for the history books: A film eight years in development that ultimately soared to $860M-plus at the worldwide box office and bucked the sour headlines of its alleged behind-the-scenes drama with director Bryan Singer; the type of buzz that typically sinks a film’s commercial and awards season. Not here with Bohemian Rhapsody.