Gov. of Minnesota Tim Walz is as bad as the Mayor of Minneapolis Jacob Frey Both weak Both Democrats 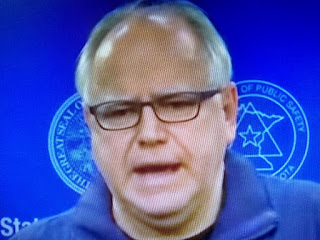 What's happening in Minneapolis is what happens when Democrats run a city.
Democrats are good talkers, they're good at analyzing stuff and telling you how they feel. But, when it comes time to making some hard decision, eh, forget about it.
I've seen this movie before almost 30 years ago in 1991.  David Dinkins, a Democrat,  just like Waltz and Frey refused to send in his police  after riots broke out in Crown Heights Brooklyn.  For three days there was nothing but mayhem.  The NYPD was ready to take action and put an end to all of it.  But, Dinkins held them back just like Frey in Minneapolis.  New York City never voted for a Democrat for mayor in 20 years after that.
The story was the same in 2015 in Baltimore with the Freddy Gray riots.  Democrat Mayor Stephanie Rawlings-Blake refused to send in her police because she wanted to give rioters their space.  Democrats are the worse people to be in charge when society falls apart.