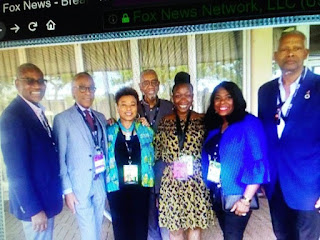 One of these clowns, Gregory Meeks, is my congressman and he's one of the biggest thieves in Congress.
His financial schemes are notorious and he's been getting away with it for years.  The Pathetic GOP in New York didn't run a candidate against him and Meeks won reelection to The House unopposed.  Democrats didn't win The House, the GOP gave it away!

Fox News reports five members of the Congressional Black Caucus took a $60,000 trip to see Beyoncé and other stars perform in concert in South Africa late last year, according to congressional disclosure records.

The lawmakers were U.S. Reps. Gregory Meeks of New York, Barbara Lee of California, Bobby Rush of Illinois, Terri Sewell of Alabama and Hank Johnson of Georgia, according to the data.
They attended the “Global Citizen Mandela 100” concert from Dec. 1-3 to celebrate the centenary birth of the late Nelson Mandela and raise awareness of global poverty. In addition to Beyoncé, other musical acts included her husband Jay Z, Ed Sheeran, Pharrell Williams and Chris Martin.