Cowboys for Trump Ride Through D.C. in Support of Border Wall 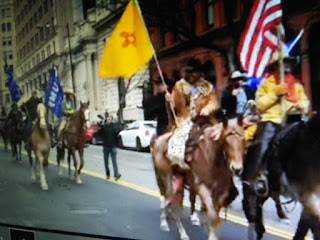 This is a good deal and I give kudos and my support for every rider who undertook their journey.
We need a southern border wall and a majority of the American people are backing Trump to get'er done.

Breitbart reports D.C. Police escorted men and women on horses through the streets of the nation’s capital on Friday as Cowboys for Trump and a last-minute Native American rider rode in support of President Donald Trump and his efforts to build a wall on the U.S. southern border with Mexico.
Some on the sidewalks cheered while others jeered as police escorted the more than a dozen riders carrying American and “Trump Make America Great Again” flags through downtown and past the White House.