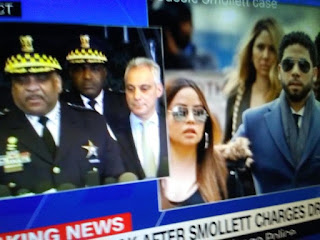 Hillary Clinton and Jussie Smollett have a lot in common.
Both got away with committing crimes because government officials in charge of bringing them to justice looked the other way.  This is not justice and it points to different rules for different people.   Cook County State's Attorney Kim Fox needs to be investigated and how top Democrats were involved in letting Smollett escape justice just like Crooked Hillary!

CNN reports all charges against Jussie Smollett -- the actor who'd been accused of staging a hate crime against himself in Chicago -- were dropped Tuesday, a development that his attorneys hailed as vindication but angered top city officials who still are calling his victimhood claim a hoax.
The prosecutor in the case said he understood that people would question dropping the charges, but that thousands of cases have similar resolutions and Smollett forfeited his bail money and did community service so that the matter would be closed before trial.
The move is a dramatic reversal in a case in which police alleged just last month that the 36-year-old "Empire" actor hired two acquaintances to attack him along a street in late January to promote his career.
Mayor Rahm Emanuel suggested Smollett is walking "scot-free" because of his stature as an actor, and emphasized that a grand jury indicted him after seeing the evidence that detectives put forward.