Keeping it Real: Trump at CPAC speech says Mueller and Rosenstein are 'targeting' him 'with bulls**t' in Russia probe 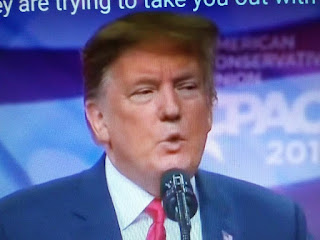 This is why Trump is loved so much.
He cuts to the chase and speaks plainly.   And he fights back and dishes out as good as he gets.

Daily Mail reports Donald Trump said Saturday that Special Counsel Robert Mueller and his team are targeting him with 'bulls**t.'
'We're waiting for a report by people who weren't elected,' he complained in a speech at the annual Conservative Political Action Conference, talking about Washington's collective anxiety over when Mueller's final report will arrive at the Justice Department and how much of it the public will see.
'Unfortunately you put the wrong people in a couple of positions, and they leave people for a long time that shouldn't be there. And all of the sudden they're trying to take you out with bulls**t, okay?'
Trump was talking about the special counsel and Rod Rosenstein, the deputy attorney general who appointed him at the Justice Department.