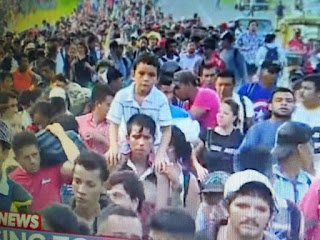 Good!  Something has to be done to stop the invasion.

NewsMax reports taking one drastic action against illegal immigration and threatening another, President Donald Trump moved to cut U.S. aid to three Central American nations whose citizens are fleeing north and declared he is likely to close America's southern border next week unless Mexico halts the flow of migrants.

Though Trump has previously threatened to close the border and has not followed through, his administration moved to cut direct aid to El Salvador, Guatemala and Honduras.