Bombshell: AG says public must know if DOJ ‘put their thumb on the scale’ in Russia probe in Fox News exclusive 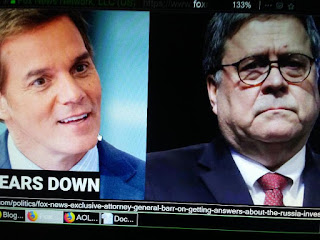 The cabal at DOJ headed by James Comey better get pretty nervous because AG William Barr is about to get all in their asses.
It's the right thing to do because these people felt they were above the law.

Fox News reports in an exclusive interview with Fox News, Attorney General William Barr explained that he is trying to get to the bottom of whether or not “government officials abused their power and put their thumb on the scale” during the early stages of the Russia probe.

"I’ve been trying to get answers to the questions and I've found that a lot of the answers have been inadequate and some of the explanations I've gotten don't hang together, in a sense I have more questions today than when I first started," Barr told Fox News' Bill Hemmer in an interview set to air Friday on "America's Newsroom."
"What doesn't hang together?" Hemmer asked.