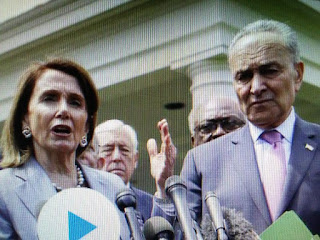 LOOK for the MSM to spin a tale saying Pelosi and Schumer got the best of Trump.
It's the other way around though.


Wall Street Journal reports Democratic congressional leaders said President Trump agreed to aim for a $2 trillion infrastructure package in a White House meeting on Tuesday, though the two sides didn’t discuss how it would be paid for, and Capitol Hill Republicans are unlikely to go along.