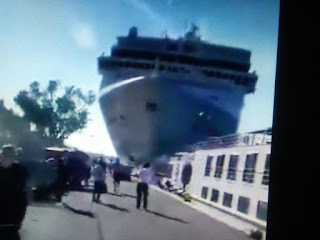 It's been my policy not to do posts centered around a video.
Context is always an issue and I don't wanna get myself and my readers caught in a manipulation.  However, in this case I'm making an exception.

Having been on several cruises and having some familiarity with these giant boats, I cannot believe my eyes.  The person who took this footage was extremely brave or foolish because there was no telling how that was going to end up.  These ships weight around 65,000 tons and even though it was moving at a slow rate of speed that dock could've been destroyed.  Good thing that tourist boat acted as a buffer from the ship hitting the dock directly.    Amazing!  The captain of this ship is toast.

Fox News reports several people were injured in Italy after a towering, out-of-control cruise ship crashed into a tourist river boat and dock Sunday morning in Venice as tourists ran in panic as a ship's horn blared.
The collision happened around 8:30 a.m. on the Giudecca Canal, a major thoroughfare that leads to the city's famous Saint Mark's Square.

BREAKING: At least 4 people injured after Cruise Liner smashes into a smaller boat and then into the dock in Venice (credit @beppecaccia ) pic.twitter.com/JgZigCHVfz
— News_Executive (@News_Executive) June 2, 2019