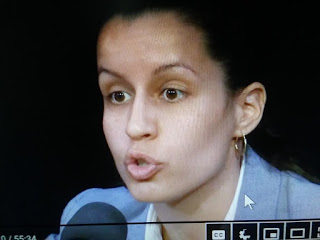 If Queens residents care about the health and safety of their children, DO NOT vote for Tiffany Caban.  This woman has very dangerous ideas about how to treat criminals.  She believes, although she would never say it in public, that blacks, Latinos, and other people of color should not be arrested for the crimes they commit because American society is racist.  That's how radical and out to lunch this woman is.

NY Post reports Rikers Island inmates are first in Tiffany Cabán’s heart.
“Our victory belongs to folks who have been locked up on Rikers simply because they could not afford their bails,” she said Saturday, days after early results showed her the likely winner of the Democratic primary for Queens district attorney.

Speaking at Al Sharpton’s National Action Network, she continued: “Together we are going to make our community safer and stronger and we are going to do it with community-driven solutions that rebuild trust, reduce recidivism and end the war and black and brown low-income and working class communities.”