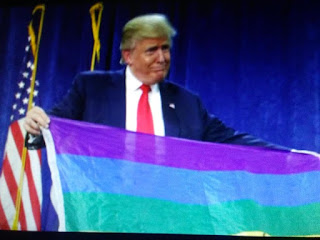 Here's a rare occasion I disagree with President Trump on this issue.
I don't agree with Gay pride month for the Sodomites.  But, Trump has been and continues to be.  What's funny is how the Leftist community attacks him for being anti-LBGT.  That's not his record.

InFoWars reports President Donald Trump tweeted Friday in celebration of LGBT Pride Month, which begins in June, and repeated his administration’s call for the international community to decriminalize homosexuality in countries where it is illegal.
Trump has frequently been attacked by LGBT (lesbian, gay, bisexual, and transgender) activists on the left, particularly for his administration’s policies on transgenderism.

As we celebrate LGBT Pride Month and recognize the outstanding contributions LGBT people have made to our great Nation, let us also stand in solidarity with the many LGBT people who live in dozens of countries worldwide that punish, imprison, or even execute individuals....
— Donald J. Trump (@realDonaldTrump) May 31, 2019