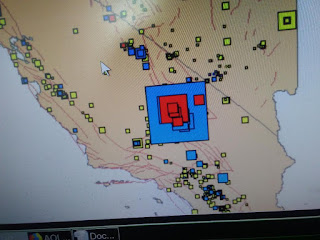 California is in for some shakes rattle and rolls.
Fortunately, the epicenter was away from populated areas.

The quake struck at 8:21 p.m.
KCAL9 anchor Sara Donchey held co-anchor Juan Fernandez’ arm as she steadied herself before ducking under her desk.

He, meanwhile, reported feeling nauseous about the quake that felt like it wasn’t going to stop.

Friday’s 7.1 and Thursday’s 6.4 both had epicenters near the community of Ridgecrest. The Thursday quake was already the biggest to hit Southern California in 20 years.
The quake Friday evening obliterated that mark.

CBS2/KCAL9 reporter Lesley Marin heard from her friend Laura who was attending this evening’s Dodgers/Padres game. “She said everyone started to scream.” Laura was clearly in a different section than some fans Rachel Kim spoke to. “People started standing up,” said one woman, “and you could tell people felt the shaking. But mostly it was the crowd going woooooooo.”