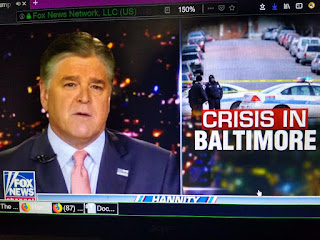 Hannity points out how Democrats who run our major cities have failed miserably but are never held to account.

Fox News' Sean Hannity ripped Democrats for calling the president's criticism of Rep. Elijah Cummings, D-Md., and the city of Baltimore racist, telling them to take care of their districts.
"Instead of focusing on the deteriorating living conditions in Baltimore Democrats are now vigorously... defending Cummings with another round of identity politics, feigned false selective moral outrage and of course attacking the president," Hannity said on his television show Monday