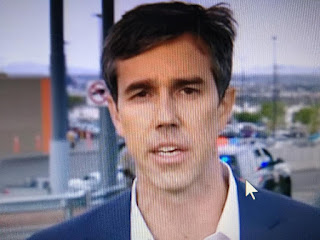 Beto O'Rourke is an irrelevant politician that used to be a hot candidate for the corrupt media machine.
That just lasted for only about 5 minutes when he got exposed as just another empty suit.  Beto is a phony who has NOTHING to offer but  played out progressive platitudes.

AOL News reports Democratic presidential candidate Beto O’Rourke on Saturday blamed Donald Trump in part for the deadly El Paso shootings that killed 20 people because he said the president’s “racism” leads “to violence.”
O’Rourke attacked the president when he was asked by an ABC News reporter if Trump had any responsibility for the shootings.
“Yes,” O’Rourke flatly responded.
“We’ve had a rise in hate crimes every single one of the last three years, during an administration where you have a president who’s called Mexicans rapists and criminals,” said the former Texas congressman and El Paso native.