How you know Tulsi Gabbard really got under Kamala Harris' skin 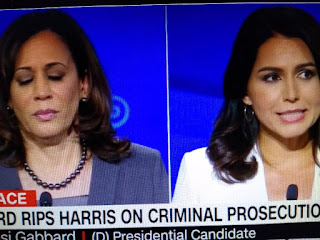 Tulsi Gabbard ripped Kamala Harris a new one and she really had no effective response to the attack.  Looik for the corrupt media to try and destroy Gabbard.

CNN reports amid a broader conversation about criminal justice reform between the California senator and former Vice President Joe Biden, the moderators turned to the Hawaii congresswoman. And she unloaded:

"But I'm deeply concerned about this record. There are too many examples to cite but she put over 1,500 people in jail for marijuana violations and then laughed about it when she was asked if she ever smoked marijuana.

"She blocked evidence -- she blocked evidence that would have freed an innocent man from death row until the courts forced her to do so. She kept people in prison beyond their sentences to use them as cheap labor for the state of California."