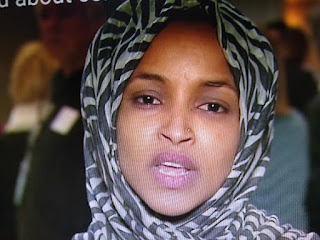 Ilham Omar is not only an America hating Leftists, but also competing with Kamala Harris at being a slut.

Daily Mail reports Ilhan Omar has been seen getting up close and personal with married aide Tim Mynett, DailyMail.com can exclusively reveal.

The Minnesota congresswoman, 37, has been carrying on with Mynett, 38, a campaign fundraising strategist, for several months, according to a source.
Mynett is married to Dr. Beth Mynett, but DailyMail.com has confirmed that he has recently left their marital home and is now living in a D.C. apartment.

Photos show that Mynett and Omar are constantly by each other's sides at events, traveling to Los Angeles, New York City, Austin and Seattle together.