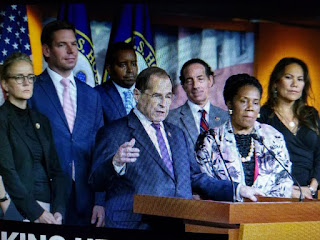 Bring it!  President Trump has nothing to fear from these socialist far left Democrats
because they are out of touch with the American people.


Fox News reports a majority of House Democrats now supports launching an impeachment inquiry for President Trump, according to a Fox News tally -- the latest sign that Robert Mueller’s shaky testimony did little to arrest the momentum inside the caucus for that politically explosive step.

With fresh support for the inquiry from California Rep. Salud Carbajal, the number of House Democrats in favor reached 118 on Friday. That’s more than half of the 235

“Our nation has seen and heard things from this president that have no place in our democracy. I believe it is time to open an impeachment inquiry into President Donald Trump,” Carbajal tweeted