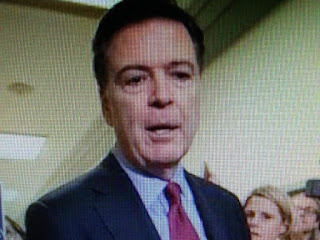 How is it right that James Comey gets to leak government documents for the sole purposes of setting up a special council?
The country then endured a bogus investigation for over two years, thirty million taxpayer dollars is spent on it.  He gets a million dollar book deal.  But, he doesn't have to pay a heavy price in either prison or a fine for his misdeeds?  Where is the incentive not to behave recklessly or lawlessly?

It's bad enough that Hillary Clinton as secretary of state collected millions of dollars from foreign governments who gave to the Clinton Foundation.  The DOJ saw no conflict of interest?  Yes, there was plenty of conflict of interest and she know nothing was going to happen to her.  She was emboldened to act even more out of control.  She didn't need a government email.  She set up one of her own in a bathroom.  She didn't care about classified documents going through it even though the FBI confirmed it was compromised by foreign governments.  She broke numerous federal laws and yet, what a coincidence, James Comey believed no reasonable prosecutor would bring charges against her.
I see an ugly pattern of disorder by an exclusive class of people who have the most power over everyone else.  This is dangerous and unacceptable for a country that supposed to be a nation under laws.
at 8/31/2019 11:59:00 AM