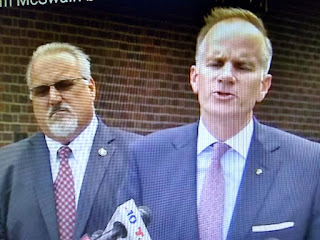 Never in my life have I ever seen a US attorney call out a DA.  These guys are supposed to be on the same team.  However, Philadelphia DA Larry Krasner is a social justice warrior who hates the police and ever worse, doesn't believe people of color should be charges with the crimes they commit because he thinks we  live in a racist society.  That's kind of warped thinking he has and it has spilled over onto people having no respect for law enforcement.

AOL News reports in the wake of a shootout that injured six police officers, the U.S. attorney in Philadelphia issued a scathing denunciation of the city’s chief prosecutor for fostering a toxic atmosphere regarding the police.

“There is a new culture of disrespect for law enforcement in this City that is promoted and championed by District Attorney Larry Krasner — and I am fed up with it,” said William McSwain, the U.S. attorney for the Eastern District of Pennsylvania in a statement released Thursday. “We’ve now endured over a year and a half of the worst kinds of slander against law enforcement — the DA routinely calls police and prosecutors corrupt and racist, even ‘war criminals’ that he compares to Nazis. The vile rhetoric puts our police in danger. It disgraces the Office of the District Attorney.

And it harms the good people in the City of Philadelphia and rewards the wicked."