Why comedy is dead in America: White co-host compares black co-host to a Gorilla WAS A JOKE! 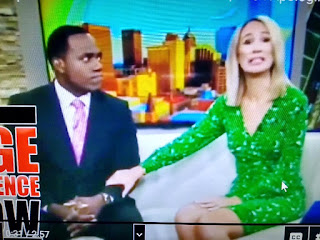 Let me tell you what most likely happened here.
The two anchors involved are friends.  They did a story about a Gorilla mugging for the cameras.  And after the  segment was over the white co-host says, "He kinds looks like you."

"Kind of looks like you," Housden said .
"Yeah, kind of does, actually, yeah."

Immediately after with no hesitation the black co-host agrees and understands it was meant as a joke and it was received as a joke.  He wasn't offended because he agreed immediately.

This is what probably happened afterwards.

The station got phones, people were greatly offended, so the white anchor had to go into full apology mode.  Which is what Libs love to do, virtue signal.  Why?  Because people can't understand what a joke is anymore.

For the record, I think the black anchor looks like the Gorilla too.  It was a funny between friends but because of stupid political correctness it's not allowed anymore.