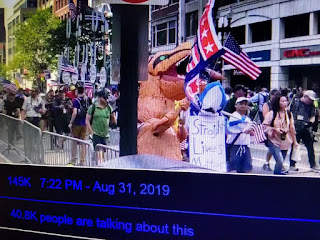 AOC needs to get her eyes checked.
There's was plenty of women at this parade.   There needs to be of these types of parades, I'm down!

Fox News reports Rep. Alexandria Ocasio-Cortez slammed a “Straight Pride” parade in Boston on Saturday and what she said appeared to be a lack of women, calling it an "I-Struggle-With-Masculinity" parade.

“For men who are allegedly so ‘proud’ of being straight, they seem to show real incompetence at attracting women to their event,” Ocasio-Cortez wrote along with a retweet of footage from the march. “Seems more like a ‘I-Struggle-With-Masculinity’ parade to me.’”

About 200 people marched in the “Straight Parade” to celebrate traditional families and defend heterosexuality, reported the Boston Globe. Marchers were reportedly outnumbered along the parade route by thousands of protesters, who gathered behind police barricades near City Hall.