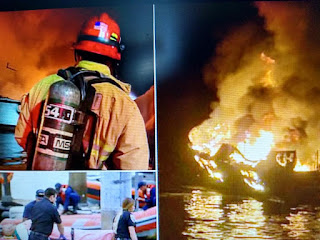 How can a boat just catch on fire?  Looks like sabotage to me.

Daily Mail reports five people were rescued and 34 are missing and feared dead after a 75-foot dive boat burst into flames off the coast of California.

The vessel, called Conception, was anchored 20 yards off of Platts Harbor on the north side of Santa Cruz Island when it caught fire in the middle of the night while passengers were sleeping below deck.

Coast Guard Sector Los Angeles-Long Beach received a mayday call just before 3.30am local time Monday.
In chilling audio the person who made the call can be heard telling a dispatcher: 'I can't breathe.'