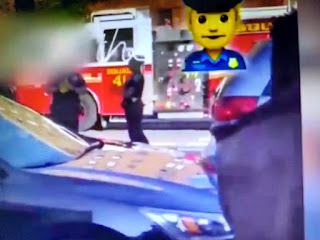 Milk cost more money than gasoline.  So I bet that carton of milk that got tossed at the cops was stolen.
Again, this is getting out of hand.  It's a red flag of what's to come between thugs running wild in New York thanks to progressive politicians who spring them from jail and the NYPD.

NY Post reports a man hurled a half-gallon of milk at a cop while officers stood guard at a Bronx fire scene, the NYPD said Thursday.

The incident happened just before 5 p.m. Tuesday after cops had evacuated an apartment building at 1454 Grand Concourse as firefighters battled a blaze, according to the NYPD.

The crowd became rowdy and a man chucked a carton of milk at one of the officers — who quickly ducked out of the way.

A short 20-second video posted to Instagram, with the word art “F— the [police emoji],” shows the man toss the carton at the cops.