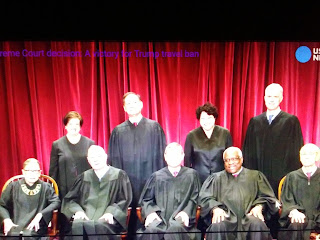 Let the illegals settle in th4e countries they pass through before they get here.
But, those countries don't have the generous welfare the US does.  That's the deal.

AOL News reports  the U.S. Supreme Court on Wednesday granted a request by President Donald Trump's administration to fully enforce a new rule that would curtail asylum applications by immigrants at the U.S.-Mexico border, a key element of his hardline immigration policies.

The court said the rule, which requires most immigrants who want asylum to first seek safe haven in a third country through which they traveled on their way to the United States, could go into effect as litigation challenging its legality continues.