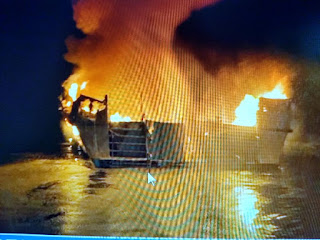 I think that fire was deliberately set.

LA Times reports authorities said Friday they believe smoke inhalation caused the deaths of 34 people aboard the Conception dive boat, raising new questions about exactly where the fire started and how it spread.

The fire broke out early Monday morning during a Labor Day weekend diving expedition, trapping the victims who were sleeping. Five crew members who were above deck at the time were able to escape and said the fire was too intense to get anyone else out.