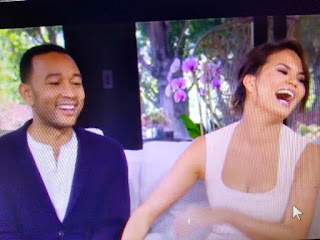 John Legend and his ditzy wife Chrissy Teigen are both virulent Trump haters.
He should stick to his craft and write songs and she should, eh, just look pretty.  I don't know what talent she has.

The president was having what Teigen called a 'meltdown' Sunday night on Twitter when he took aim at the TV host and model and her multiple Grammy award-winning husband.

The special featured Legend, who is the founder of FREEAMERICA, an organization that raises awareness for criminal justice reform.