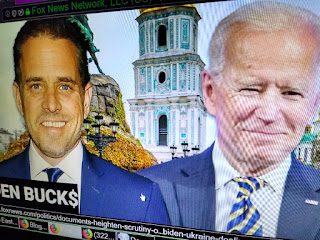 This ample evidence that VP Joe Biden sold out his office to enrich himself and his son.
It's only needs investigating.  The sub-scandal to all this is how the mainstream media refuses to perform the journalism as a free press is supposed to do.  But, it's how the media is getting exposed for the frauds that they are.

Fox News reports a batch of newly released documents, including court filings as well as notes from interviews conducted by Rudy Giuliani, have put the spotlight back on Biden family dealings in Ukraine—even as House Democrats' impeachment probe zeroes in on President Trump’s push to convince Kiev to investigate them.
And they've raised more questions about how much money Joe Biden's son Hunter made while serving on the board of a Ukrainian natural gas firm at the center of the controversy, with one estimate putting the figure in the "millions."

Among the documents, as Fox News reported Wednesday, are notes from an interview Trump attorney Giuliani conducted with fired Ukrainian prosecutor Viktor Shokin earlier this year, in which he claimed he was told by former U.S. Ambassador to Ukraine Geoffrey R. Pyatt to back off an investigation involving that firm, Burisma Holdings, and its founder. According to interview notes, Shokin claimed Pyatt -- currently the ambassador to Greece -- told him to handle that investigation “with white gloves.”