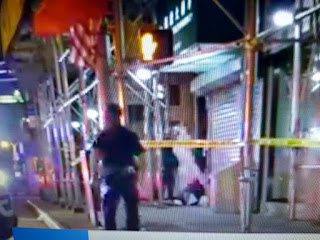 New York has become a homeless camp as a result of Bill de Blasio's policies that makes the problems worse.

NY1 reports police have charged a man with killing four homeless men in Chinatown this weekend.

24-year-old Randy Santos has been charged with four counts of murder, and one count of attempted murder. Santos, who is also homeless, was arrested yesterday shortly after four men were discovered dead on various streets of Chinatown early in the morning.

Investigators say the victims were sleeping on the street, vulnerable and unsuspecting.

That's when, police say, Santos beat their heads repeatedly with a pipe, with so much force that four of them died at the scene. A fifth victim was also severely hurt, according to authorities.