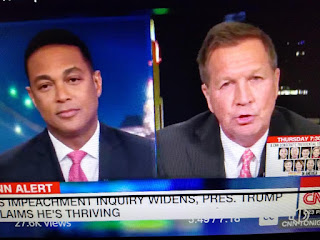 Don Lemon is an arrogant ass who don't realize how stupid he is.
He actually thought a missing air plane went through a black hole.  He wasn't joking, he was series.  I stopped taking him seriously after that.

Fox News reports CNN anchor Don Lemon on Monday asked Ohio governor-turned-CNN commentator John Kasich if he was "confused" by the transcript of President Trump's call with the Ukrainian president and then went on to suggest that he's a Trump "apologist."

Lemon insisted that "anybody with half a brain" knows what Trump was saying to President Volodymyr Zelensky after reading the transcript and called it "obvious."