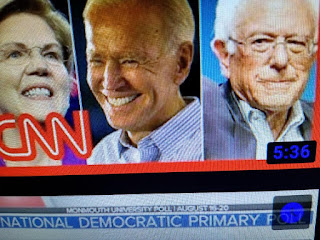 Joe Biden's run for president was over on the first day he announced his bid for president.
He gave a rambling speech in which he badly slurred his words.  But on name recognition and overwhelming black support he maintained a double-digit lead over his closest competitors, Bernie Sander and Elizabeth Warren.

That was then, but this is now.  Revelations that Biden sold out his office while serving as VP to enrich himself and his drug addict son Hunter has caused his poll numbers to crater.

At the same Bernie Sanders suffered a heart attack that resulted in a news blackout.  The mainstream media kept voters in the dark for four days.  They didn't want the public to know that 78 year old Sanders isn't healthy enough to be trusted with the presidency.

Which leaves the door open for Pocahontas Elizabeth Warren.  A white woman as white as milk who deceitfully passed herself off as a Native American to take advantage of affirmative action laws to wrangle a professorship at Harvard.  She's a woman with a lot of plans in how to destroy America.  Thankfully what she brings to the table is actually comic relief that Donald Trump will certainly take advantage of.

It's Warrens race to lose.  Who knows?  Maybe the lesser candidates like Kamala Harris and homosexual Queen  Pete Buttigieg will get a second looks?  Not!

However it shakes out.  None of the Democrats running for president have a shot in defeating Trump who may very well win by a landslide.  That's why Democrats are going for impeachment a little more than a year before the election.
at 10/05/2019 10:39:00 PM