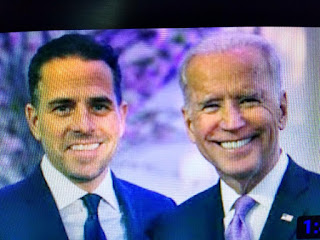 Hunter Biden is a screw up!
Yet, he gets to make all this money because he's the son of a vice president.  But, if one thinks Joe Biden didn't get filthy rich tooby selling out his office, you're not paying attention.

“For news shows on MSNBC, CNN and other cable networks, nothing is more disgusting than the mention of what Hunter Biden actually was doing in Ukraine,” law professor Jonathan Turley of George Washington University writes in The Hill.

“What is most remarkable about the paucity of coverage of Hunter Biden’s dealings,” he adds, “is the conclusory mantra that, ‘This has all been investigated.’”

Turley, 58, a native of Chicago, cites examples of MSNBC’s Nicolle Wallace cutting away from a speech by President Trump when he started to discuss the Bidens; NBC’s  Chuck Todd accusing Sen. John Kennedy, R-La., of trying to “gaslight” viewers by referencing the Bidens while answering a question about Ukraine; and CNN’s Erin Burnett switching to a discussion of President Trump when Rep. Lee Zeldin, R-N.Y., tries to discuss the Bidens.