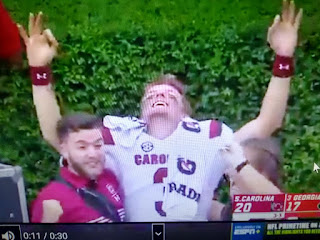 This is why they play the games!
The South Carolina Gamecocks were 24 point underdogs to the ranked Georgia Bulldogs.  Yet, South Carolina prevailed in one of the most exciting regular season games I've ever seen.  This is what makes collage football so great!

CBS Sports reports South Carolina was down to its third-string quarterback after losing starter Ryan Hilinski to an injury in the third quarter, but the Gamecocks survived and pulled off one of the most stunning upsets of the season, taking down No. 3 Georgia 20-17 in double overtime. After South Carolina kicker Parker White missed a potential game-winning field goal from 33 yards out in the first overtime period, it was Georgia's Rodrigo Blankenship who ended the game with a miss on a 42-yard attempt.

The upset victory for the Gamecocks ties for the second-best in program history, trailing only their win against No. 1 Alabama in 2010 and matching a 1981 win at No. 3 North Carolina. It's South Carolina's first victory over a top-five team since defeating No. 5 Missouri in double overtime in 2013, and it's the program's first win over a ranked opponent since 2016.