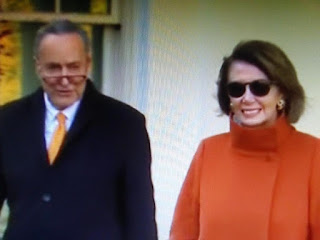 The More dirty Democrats go after Trump, the stronger he gets and the more stupid they look.

MSN News reports The White House declared war on the House impeachment inquiry on Tuesday, announcing that it would not cooperate with what it called an illegitimate effort “to overturn the results of the 2016 election” and setting the stage for a constitutional clash with far-reaching consequences.

In a letter to House Democratic leaders, the White House said the inquiry had violated precedent and denied President Trump’s due process rights in such an egregious way that neither he nor the executive branch would willingly provide testimony or documents.