Rudy Giuliani: 'I discovered a pattern of corruption that the D.C press has been hiding for years, I discovered a pay to play scheme in the Obama admin that will be embarrassing to the Dem party. 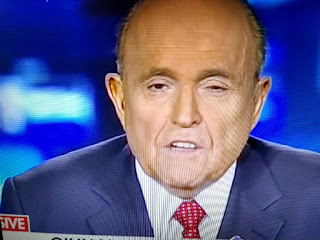 This is the headline that the mainstream media won't print because it blows the whistle on the Obama administration and the wide ranging corruption that went on there.
This is why Giuliani is being trashed daily by the media,  which is controlled by the same Deep State, the same Deep State  trying to get rid of Trump since day one in office!    Why do you think Giuliani wasn't called as a witness by Adam Schiff?  They know he's got documents, real proof of corruption and wrong doing that will be admissible in a court of law, or at an impeachment trial in the Senate.  So bring on the impeachment, Giuliani is ready!

“Are you afraid, Mr. Mayor, that you could be indicted?” Henry asked.

“Oh, wow, how long have you known me, Ed?” Giuliani said, adding, “Do you think I’m afraid? Do you think I get afraid? I did the right thing. I represented my client in a very, very effective way. I was so effective that I’ve discovered a pattern of corruption that the Washington press has been covering up for three or four years.”

“You should have jumped all over this in 2015 when this awful conflict was mentioned and it was hidden and suppressed by the Washington press,” he continued.

“The reality is, I’m embarrassing you because you didn’t do your job, and I’m also going to bring out a pay-for-play scheme in the Obama administration that will be devastating to the Democrat Party.”

Then, Giuliani warned that if the Mafia couldn’t kill him, the media wouldn’t either.