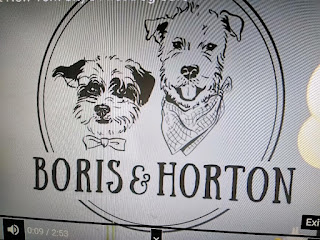 I've been a pet owner for most of my life.
But, I would never think to bring my dog to a restaurant.  It's not right and it's not sanitary to do that to other people.  However, there's others, Liberal idiots mostly, who think it's a great idea.  However, these pet owners find themselves be treated differently than non-pet restaurant goers all because of a law that never should have been passed.


NY Post reports a pup-friendly East Village eatery has a bone to pick with the city Health Department.

The restaurant, Boris & Horton, says that in yet another example of city regulations-gone-wild, it now can’t even display a menu in its animal-accommodating section, much less allow customers to order food from a waitress there.

Patrons still aren’t allowed to be served food or pick up their vitals in the pet-friendly section, but it was previously OK to at least order from a waitress with an iPad.

They can still order from their phones.
“It’s a bit ridiculous,’’ Liam Steele, 31, who was on the non-pet side of the eatery Sunday, said of the new edict.
Coppy Holzman, founder of the cafe on Avenue A at East 12th Street, was harsher

A Health Department told The Post on Sunday that the agency must ensure that “food-service establishments are preparing and serving food in a safe and hygienic manner.

“Some entrepreneurs have created animal-friendly venues where food is brought in. But animals, other than service animals, cannot be inside a restaurant,” the spokesman said.