Dwayne Wade thinks he's a good parent by referring to his son with female pronouns He a terrible Dad-period! 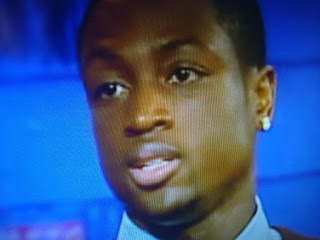 I normally don't go around telling other people how to raise their kids.
But, since this is hitting me in the face via corporate media, I got to unload here.  Dwayne Wade is a lost person who needs help.  Beyond that his son, Zion, also needs help too.  Unfortunately, the psychological and the psychiatric communities have succumbed to liberalism and all the craziness that come with it.


So what professional help is there for Wade?

So. although leftists think he's showing tremendous courage calling his own son, who thinks he's a girl, by a female pronoun, it's just a sad waste on many levels.  His son is supposed to be a man.  That's the way it ought to be-period!  Zion is a young man who needs guidance.  He's not getting it by his father.

AOL News reports retired NBA superstar Dwyane Wade went in-depth this week about family, parenting and marriage on the “All the Smoke” podcast. The three-time NBA champion spoke with Matt Barnes and Stephen Jackson about how his view evolved regarding his 12-year-old son, Zion, who prefers to be addressed using feminine pronouns.

Wade: Nothing changes with my love

Barnes asked Wade, 37, what it’s like to play in a masculine sport and “be comfortable enough” to have a relationship with Zion that’s open and honest. Wade has spoken out in support of her as well as everyone else in the LGBTQ community.