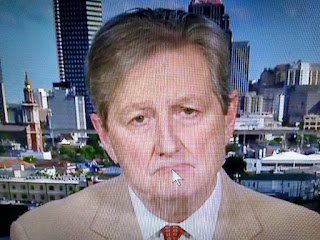 I think Sen. Kennedy has a great deal to tell about what happened to the DNC server that totally escaped from U.S. view.
Remember, Crowd Strike!

Fox News reports Sen. John Kennedy, R-La., on Sunday walked back an erroneous comment he made last weekend touting the debunked theory that Ukraine hacked the Democratic National Committee's emails in 2016, but then quickly followed that up with another unproven theory accusing former Ukrainian President Petro Poroshenko of actively working for Hillary Clinton in her 2016 presidential run

Speaking on NBC’s “Meet The Press,” Kennedy admitted he was wrong when he told Chris Wallace on “Fox News Sunday” last week that Ukraine could have been responsible for meddling in the 2016 presidential elections

“I walked it back because I was wrong,” Kennedy said, adding that he thought Wallace asked if Ukraine had meddled in the U.S. elections, not about discredited theories of Ukrainian hacking. “I went back and looked at the transcript and realized Chris was right and I was wrong.