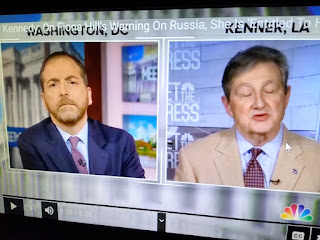 What Chuck Todd has just  said is a lie!
According to an accusative search the Ukrainian court has demonstrated that the Ukraine DID interfere in the 2016 election!  Todd is a stone cold liar who belongs with the other liars like Al Sharpton and Brian Williamson who also work for NBC!  This news organization is nothing but a joke o the American people!  Chuck Todd wouldn't know the truth if it sat on his face!  He's a damn lair! Even in this interview Kennedy takes him to lunch!

'Russia was very aggressive and they're much more sophisticated. But the fact that Russia was so aggressive does not exclude the fact that President Poroshenko actively worked for Secretary Clinton,' Kennedy asserted in an interview with Meet the Press Sunday morning.

He was referencing the then-president of Ukraine, Petro Poroshenko, who Kennedy claims was working to help Clinton in her run against Donald Trump.

This baffled Todd, who pushed back on the senator's comments.