Kamala Harris, Willie Brown's side piece, throws in the towel no longer seeks the presidency, THOT 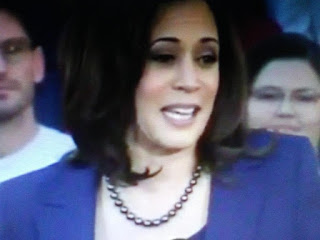 I never thought much of her candidacy from day one.
She never brought anything to the table other than her ability when she was quite young to hoochie around with former Mayor of San Francisco, Willie Brown.  Kamala never had what it takes and it showed in her numbers.  She sucks!

Fox News reports California Sen. Kamala Harris on Tuesday announced that she is withdrawing from the race for the Democratic presidential nomination, after failing to capitalize on early enthusiasm for her campaign and watching her poll numbers collapse

"In good faith, I can’t tell you, my supporters and volunteers, that I have a path forward if I don’t believe I do," Harris wrote in an email to supporters. "So, to you my supporters, it is with deep regret -- but also with deep gratitude -- that I am suspending my campaign today."