Sen. Graham rips Schiff impeachment tactics as Senate readies for likely trial He 'is doing a lot of damage to the country, and he needs to stop 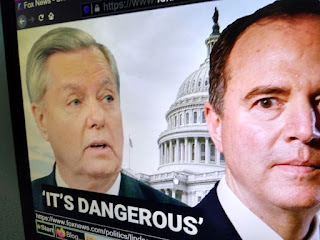 It’s getting close to the time where everything the Democrats have been doing will fall apart!

Fox News reports Senate Judiciary Chairman Lindsey Graham, R-S.C., is preparing for a likely impeachment trial in the Senate, and he lambasted House Intelligence Committee Chairman Rep. Adam Schiff, D-Calif., for his actions in leading the inquiry into President Trump.

"I think it's dangerous," Graham said. "Here's what I would tell Adam Schiff. Do you really want to start calling other members, Republican members of Congress in oversight? Do you want me to call you to the Senate as part of Senate oversight?"

Graham said he would never do that, because "I'm not going to participate in things I think will destroy the country," Graham said. He pointed out that while members of Congress are not above the law, "we're not going to turn the Senate into a circus."