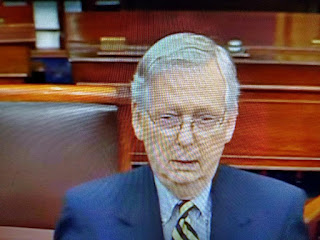 Speaker of the House, Nancy Pelosi is lucky to know what day it is let alone how to handle her own business!
She's extremely incompetent as a member of Congress.

Fox News reports Senate Majority Leader Mitch McConnell, R-Ky., on Monday tore into House Speaker Nancy Pelosi, D-Calif., just days after the speaker backed down from her refusal to send the articles of impeachment against President Trump to the Senate, calling Pelosi’s delay a “strange gambit” that “produced absolutely nothing.

During a speech on the Senate floor, McConnell chastised Pelosi for ending what he called “her one-woman blockade” and questioned her strategy for holding off sending the articles to the Senate.