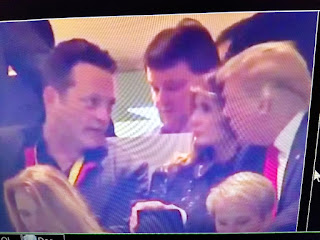 Unfortunately for the left, they think Twitter represents the majority thinking in this country.
They don't, not even close.  So Vince Vaughn has nothing to worry about from the likes of Tim Burke.  I never heard of this clown until today.  Who cares what they think on Twitter, it's a cesspool for losers.

The Independent reports Vince Vaughn is facing a backlash after being filmed shaking hands with Donald Trump at a football game.

The Wedding Crashers actor was sat alongside Trump and first lady Melania Trump in a private box at the National Championship Game in New Orleans.

The video, captured by journalist Timothy Burke, shows Vaughn speaking to the pair and Trump listening intently. Vaughn then stands up and leaves, but not before shaking Trump’s hand and exchanging smiles.

“I’m very sorry to have to share this video with you,” Burke wrote alongside his video. “All of it, every part of it.”

On Twitter, many expressed their dismay at Vaughn’s actions. “Vince Vaughn is one of my favourites,” one tweet read. “I always knew he was Republican but this, so gross. I don’t need a Wedding Crashers sequal [sic] anymore.”

I'm very sorry to have to share this video with you. All of it, every part of it. pic.twitter.com/ELMbDHZbZq
— Timothy Burke (@bubbaprog) January 14, 2020