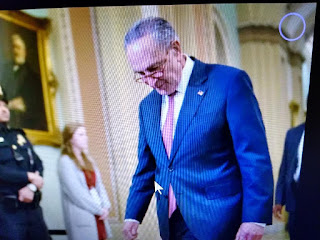 Nancy Pelosi put her Democrat Party on a Kamikaze mission.
The outcome was foretold before the Dems embarked on a idiotic path.  But, stupid Pelosi proceeded anyway only to get her ass kicked once more by Donald Trump.

NY Post reports the Senate voted largely along party lines — 51 to 49 — to not seek witnesses or further documents in President Trump’s impeachment trial, setting the stage for a vote to acquit the commander in chief.

Sens. Susan Collins of Maine and Mitt Romney of Utah were the only two Republicans joining all Democrats in voting for more witnesses.

“The motion is not agreed to,” Chief Justice John Roberts said after the vote

The vote came after Republican Sen. Lisa Murkowski of Alaska said that she would not vote for more witnesses in President Trump’s impeachment trial, thwarting Democrats’ efforts to have more evidence introduced in the proceeding and virtually guaranteeing Trump’s acquittal